Interned in the concentration camp of Saufboeuf, near Mauzac (Dordogne), were the British officers who had been tranferred from the prison at Périgueux, where they had previously been detained ; these officers were involved in what was known as the « parachutists case ». The group of British agents under « Vic » (Major Gerson) succeeded in contriving their escape, and managed to get them through to Spain.

The object of the present note is to tell in a summary form how the group was able to achieve this task, and what help it received from outside sources.

As early as the beginning of 1942, Major Gerson had entered into contact with Maître Goëau-Brissonnière, Barriste rat the Paris Court of Appeal, who had taken as his client Philippe Liever, one of the prisoners first at Périgueux, then at Mauzac.

« Vic » (Major Gerson), who also undertook the transmission to London of the items of political intelligence culled at Vichy by Maître Goëau-Brissonnière for the British services, was thus kept advised of changes in the conditions of internment of the British officers ; and when he considered the moment opportune he asked the barrister to put him in touch with somebody reliable, discreet, courageous and generally capable of becoming the « leader » in an operation of such a delicate character. The plans for the financing of the operation were drawn up by Gerson in the course of numerous discussions with Goëau-Brissonnière at the Palais de Provence at Cannes, and by a person the choice of whom had been ratified by Gerson – an escaped prisoner, Lucien Rachline, on whom devolved the task of directing the operation.

In order to penetrate as far as the camp, Rachline paid a first visit to Mauzac, accompanied by Maître Goëau-Brissonnière, whose secretary he purported to be.

On alighting at Mauzac railway station, Rachline and Goëau-Brissonnière met Madame Pierre Bloch, wife of the Deputy of the Aisne, who had just visited her husband, interned at the camp in the same hut as the British officers. Goëau-Brissonière, provided with a lawyer’s permit, paid a normal visit to his client, with whom he had conferred at Périgueux at the end of 1941 in regard to a plan for an escape which had proved impossible of accomplishment. He attempted to get Rachline into the camp, but as the soi-disant secretary had no lawyer’s permit he had to remain at the other side of the barbed wire.

Nevertheless, it was possible in this way to effect a kind of introduction of Rachline to all the prisoners of the British hut. The Deputy Pierre Bloch was able to exchange a few signs, and even a few words, with his friend.

In the course of his conversation with Liever, who had been advised by moans of a letter suggesting the aim of the visit, Goëau-Brissonnière was able on the one hand to gather a good deal of information useful in connection with the escape, and on the other to obtain knowledge of a definite plan, which later had to be discarded by the « leader » of the escape, to be replaced by another project, better suited to the circumstances. Goëau-Brissonnière and Rachline spent forty-eight hours at Mauzac, in order to study the region, the inhabitants, and the possibilities and impossibilities af all kinds.

This accomplished, they left for Cannes. Il was in effect necessary to complete the circle of those to accomplish the escape. In particular, Rachline needed a first-class assistant. He chose Lambert, of the military aviation, an ardent gaullist, whom he introduced to Goëau-Brissonière at the Palais de Provence at Cannes.

Goëau-Brissonnière had a fresh interview with Gerson at Nice at the Hôtel Cécil.

Rachline and Goëau-Brissonnière having received from Gerson a ratification of the general lines to be followed, apart from the technical aspect, which was left to the « leader », Rachline returned to Mauzac, where he made useful contacts with Madame Pierre Bloch. He installed himself at the only inn in the neighborhood.

During this visit to Mauzac, Madame Bloch introduced to Rachline two of her friends, who offered to participate in the escape project, a man known as « Le Frisé » (« Curly-Head »), and a friend of « Le Frisé » who later declared himself to be ill and took no part in the action.

« Le Frisé » had long had the idea of a plan for an escape, which appeared to Rachline to be impossible of accomplishment. In effect, it consisted in placing at the disposal of the British officers a tandem bicycle, when it was necessary to reach a spot 50 kilometers from the camp. Rachline substituted a project which was essentially based on transport by car.

Lambert and Rachline were then put in touch with the wife of a warder, Vincent, who proposed to take them to see a doctor friend who had a car. Lambert, Rachline and Madame Vincent then left by cycle for a spot 60 kilometers from Mauzac in order to meet the doctor, who agreed to lend his car, but without having exact knowledge of the use to which it was to be put.

Unfortunately, this car was practically beyond service ; but the doctor promised to procure another vehicle for the sum of 20.000 francs, which Rachline promised to remit within 48 hours.

On their return to Mauzac, Lambert and Rachline met Goëau-Brissonnière, who had come to joint hem there in his capacity as liaison between them and Gerson on the one hand, and the prisoners on the other. The new plan conceived by Rachline took shape and substance both inside and outside the camp, and soon everything was elaborated to perfection.

Goëau-Brissonnière asked Rachline to accompany him to Cannes to meet Madame Liever, who was to serve as a complementary liaison agent. But Madame Liever declared herself incapable of assuming this task.

Madame Pierre Bloch had a talk with Maître Goëau-Brissonnière and with Rachline, in the course of which it was agreed that she would go to Vichy to see Laval, in order to ask that a pardon might be granted her husband.

In effect, if originally the escape undertaken by the « Vic » group was to include only the British officers, to whom Liever was added merely in consideration of his rôle as liaison agent, Rachline had asked Goëau-Brissonnière to obtain Major Gerson’s sanction for Pierre Bloch to be included among the persons to be got out of the camp, and Major Gerson had agreed to this on his own responsibility.

Now, it was undesirable for Madame Pierre Bloch to be wanted by the police as an accomplice in connection with the escape ; hence the advice given by Goëau-Brissonnière and Rachline.

After the interview at Cannes, Rachline and Lambert left for Bergerac with the funds which Gerson had deposited with Goëau-Brissonnière. Major Gerson had moreover specified that the rest of the sum was to be paid by Madame Pierre Bloch, who held a certain sum belonging to the British services.

Rachline then gave Lambert the task of taking the money to the doctor, who, pleading his status, refused to do anything whatsoever for our services.

Rachline then summoned « Le Frisé », with whom he repeated the journey by cycle through the day and the night, thus confirming the impossibility of this solution. It was then that Rachline asked « Le Frisé » whether he did not know somebody who owned a car. The latter, with considerable reluctance, admitted that he possessed a light lorry for black market purposes. This lorry seemed to be suited to the operation, which no longer concerned five British officers as originally planned, but a much larger group. On the repeated insistence of Rachline, « Le Frisé » agreed to lend this lorry.

Meanwhile, a false manœuvre within the camp had warned the canteen-keeper of the plan. The latter had a discussion with Rachline on the square at Bergerac, in the course of which the following two solutions were proposed : fifty thousand francs to assist the operation, or a bullet in his hide if he refused.

Lambert and Rachline had with Madame Vincent a similar conversation. She said that the business was too dangerous for her and her husband, and that the sum of fifty thousand francs was too small. Rachline delivered his ultimatum : either she and her husband would place themselves under the orders of Rachline, or they would be « liquidated » by the Intelligence Service if anything happened.

The date of the escape was chosen by Rachline : the night of 14th/15th July. He considered this date to be suitable, since the police would be well occupied for these two days, London having advised the French to demonstrate on the occasion of the National Fête.

The plan scrupulously elaborated by Rachline was transmitted to the prison through the intermediary of Madame Bloch, the rôle of each prisoner being determined. The list of departures from the camp was established in advance, the places of departure decided. The car was to be parked one kilometre from the camp, on the road in a disused quarry.

On 10th or 11th July, Madame Bloch was to return to Bergerac, where she had personal friends, and where she was to meet Rachline in order to confirm that his instructions would be followed.

She then brought with her a piece of newspaper on which Pierre Bloch had written that he asked permission not to leave the camp, as he was afraid for his wife and children. He put the question in the following form : « You have a wife and tree children ; what would you do in my position ? ».

Rachline sent Madame Bloch to Vichy as had been arranged, and told her that Pierre Bloch had nothing else to do than to follow his comrades. Pierre Bloch yielded to persussion.

It had also been agreed that as soon as the operation had been accomplished, and at the earliest possible moment, Rachline would send a telegram to Madame Bloch, who would be staying at Vichy with Madame de Cassagnac, and another to Oullens to advise Gerson (at an address which had been agreed upon).

CHAPTER III : A FEW DETAILS ON THE OPERATION

The coup was to be effected at two o’clock in the morning, but Rachline and Lambert waited until 3.30 a.m., when the prisoners came out, and everybody made for the car which then left, driven by « Le Frisé », in the direction of a hidding place proposed in advance and approved by Rachline. Rachline and Lambert, driven by the wife of « Le Frisé » in her Citroën, took the train at Mussidan, sent the telegrams as arranged at Périgueux, and returned the next day to Lyons to report on their mission to Major Gerson.

It was the British services, under the direction of Major Gerson, which were responsable for each « body » throughout the journey from the prison to England. Thus everything had been prepared in great detail. For instance, false identity papers had been sent to Major Gerson for the British officers. For the others, these papers were established from all kinds of documents. Photographs, cards, etc. were supplied by the French in France. An agent of the « Vie » group, Denise Mitrani, was delegated to bring them to the place of hiding.

The orders of the British services concerning security were very strict. Each time a « body » left the place of security, he was accompanied everywhere, in order to ensure that no imprudence was committed.

It should be noted that before the evacuation for Perpignan, Pierre Bloch had a moment when his courage failed him, as he feared he might be recognised. Major Gerson and Rachline persuaded him to leave. Il was Gerson who went to fetch him at the flat of a Monsieur Goldenberg, and who accompanied him personally. Rachline 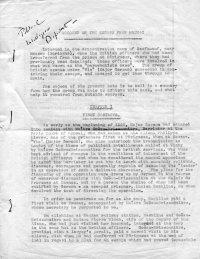 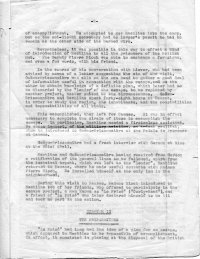 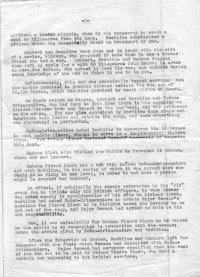 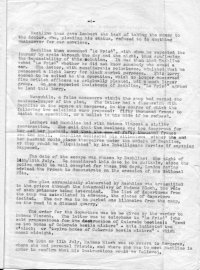 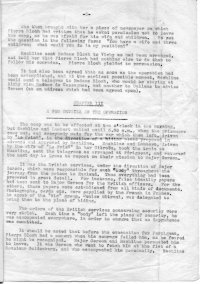