Lazare RACHLINE was about 45 years of age when he was captured by the Germans during the Battle of France. In March 1941 he escaped. Although he was already a hunted man his every effort for the next years was directed to resisting the Germans, but it was not until March 1942 that he was at last able to make contact with a British officer engaged on a special mission in France. RACHLINE immediately volunteered to help on a full time basis and within a very short time has successfully accomplished his first major operation.

He personally organized and supervised a gaol break involving the bribing of guards, the smuggling of implements to the prisoners and the rapid transport of the prisoners away from the gaol. RACHLINE had planned this operation to its minutest details. All the prisoners were supplied with false identity cards ; the were hidden ; the were given food and they were assisted to the Spanish frontier where guides were able to lead them to safety.

After this exploit the search for RACHLINE was intensified by the Gestapo. He led the peculiar life of the underground. His identity was continually changed ; he had no permanent home ; he was nowhere safe.

He took command of an organisation devoted entirely to assisting the escape from France of people who were required by headquarters in England. It was not until July 1943 that RACHLINE was finally ordered to come out of France to avoid his capture and the consequent possibility of compromising other people.

In spite of the great handicaps under which he was working, RACHLINE was able, before he was recalled to England, to organise and successfully carry out the escape of no fewer than 60 people, many of them British officers whose escape and continued activity greatly contributed to the ultimate liberation of France.

All of the operations organized by RACHLINE bore the same hallmark. They were carefully planned ; they were bold in conception and brilliantly carried out and his paramount consideration was, in every circumstance, the safety of the men he was assisting.

In recognition of Monsieur RACHLINE’s valuable services to France and Great Britain ; services carried out with courage, endurance, devotion to duty and complete disregard of personal safety ; services which have saved a large number of valuable lives ; I strongly recommend that he be appointed and officer (civil division) (Honorary) in the Order of the British Empire. 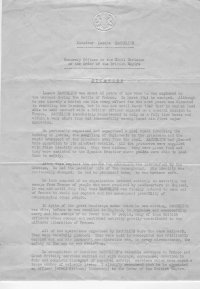